Remember when money was sacred?

Thanks to The Great Transformation, there is an increasingly free market in money. We spend money continuously, and get paid continuously.

It wasn’t so long ago that money was sacred at the bank. They had to give you a toaster instead.

My parents grew up in a different world. They taught me money was sacred. You had a job for a fixed number of hours, paying a fixed amount. That was all the money you got. Earning more was very difficult. Side jobs were lousy and rare. You’d spend lots of time to sell unwanted items at yard or sidewalk sales, at severe discounts. Everyone kept a strict budget. The edge was never far away.

Money spent other than on necessities was a special treat, a grand honor or dire emergency. 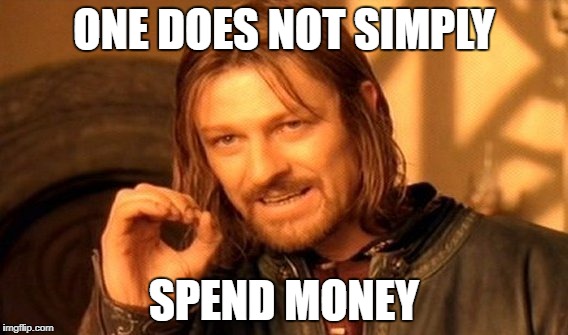 This cultural attitude is hard to learn. It is also hard to unlearn. It is quite jarring when you first see it violated.

When I moved out to Denver to work at Social Games on the Cyperpunk TCG, I met a group that neither had enough money, had ways to earn more money nor treated money as sacred.

They’d think nothing of paying a dollar for a Slurpee. On payday, they’d all get takeout. Far from payday, they’d (literally in one case) search their seat cushions to find change with which to gas up their motorcycle, to get to work.

Anything they had, that could have been reasonably sold, would eventually have been.

I did not understand.

In a start-up with one angel investor who lacked the ability to reinvest, and little hope of raising additional funds, they did not prepare for the inevitable cash crunch while trying to sell enough to stem the bleeding. I don’t know if we could have stabilized if given a few more months, but we had a shot only with those months. We likely fail anyway, but to see it all thrown away infuriated me.

MetaMed’s final blow was similar. My replacement as CEO increased our spend, leaving insufficient runway to do the things necessary to raise additional funds, and failed to realize (despite my repeated warnings) that this meant 0% chance of success. The plan’s timeline didn’t work. It was incoherent. Again, we probably fail anyway, but to do that which inevitably fails? Infuriating.

I did not understand.

What was wrong with these people? Money was sacred.

Sure, it wasn’t automatically sacred, but it was sacred in context. Supply was limited. Being flush today doesn’t change that.

On The Wire, a character who not a day ago was about to be killed for lack of funds burns hundred dollar bills in a bar. His explanation? “When I’m flush, I’m flush.”

In Denver I had some savings, but fully understood I had a terrible salary and acted accordingly. I rented a $400 apartment, lived on $1,000 a month, agonized over buying an occasional luxurious Quiznos sandwich or a pizza, and worked to solve the local Indian casino poker game (it had a strange unique structure for legal reasons) to pay the rent while getting paid in equity to help the company.

Later, I had to train myself out of that. I taught myself that increasingly large amounts of money weren’t sacred to me. It is still a sin (in my code) to waste money or make a bad trade, even for trivial size. I’ve kept some amount of sacredness. I think this is important in a makes-my-12-rules-for-life kind of way. Don’t lose that cringe! But ‘throw money at the problem’ is an option, and ‘buy it even if it’s expensive because you’ll enjoy it’ has its place.

Money moving from sacred to non-sacred is a huge change.

When money is sacred, so are things one can buy. All worthwhile possessions are prized possessions.

When money isn’t sacred, neither are things one can sell. Only things you cannot efficiently sell can still be prized. Potential trade becomes an enemy.

When one is flush, one buys experiences, memories and hard-to-sell assets.

If one does not, one falls victim to the wealth tax.

The slack tax takes many forms.

In Denver, it took the relatively benign form of obliviousness and hyperbolic discounting. People spent money on themselves, voluntarily, acting as if they were more wealthy than they were, leaving them poorer still.

It has less benign forms. Governments and other bandits look for wealth and take it. Sometimes those bandits are your friends, family and neighbors. A little giving back is a good thing, but in many cultures demands for help and redistribution rapidly approach 100% – life is tough, and your fellow tribe members, or at least family members, are endless pits of need, so any wealth that can be given away must be hidden if you want to remain in good standing. Savings, security and investment in anything but status are all but impossible. There is no hope for prosperity.

In between is commercial pressure, price discrimination and hold-up problems. Agents see free energy and work to extract it by charging for access to complementary goods, holding out promises, creating perception of needs and manufacturing expensive status competitions. The manufacturer of a key component, or the head of the union, demands almost all of your profit margins. Products advertise miracle effects that might solve your problems; you know they’re lying, but what else is there to do? And what would you do without the hot sneakers, the latest handbag, the hip new phone or the most prestigious college degree?

The most insidious traps are explicit slack traps. You must send the signal that you have spent all your resources. Any diamond (or college, or house..) is fine, so long as it cost you everything you had, so I know you love me. You can raise more capital for your start-up, but first you must be broke, or it would be irresponsible to give you more yet. Also would mean I wouldn’t have as much leverage.

The Slack Tax’s most popular form is the Wealth Tax. But it works on any resource. Thus, for example, the need to create socially acceptable, legibly sacred time.

Without strong defenses, those forces out to get us will find a way. All slack, and thus hope, will be lost.